Today, the vast majority of compound archers rely upon the use of a dedicated release aid. Of course, this is for good reason. The use of a quality release promotes consistent shooting, thereby positively impacting one’s accuracy. However, many archers are left in question which release to purchase.

I, myself have used a T.R.U. Ball Stinger release for a lengthy period of time, both in target and bowhunting applications. As such, this has provided me with the opportunity to review the Stinger, in a detailed manner.

Of T.R.U. Ball’s numerous releases, few have remained as popular for such a prolonged period, as the Stinger. The T.R.U. Ball Stinger has served as one of the company’s most popular releases for over a decade and is consistently ranked as one of the hottest-selling releases within the industry in any given year.

The T.R.U. Ball Stinger is a moderately priced, caliper-style release that has been on the market since shortly after the turn of the new millennium. This release features a wrist strap with velcro securement (read.. best releases round-up review).

The Stinger’s wrist strap is connected to its head via a metal rod covered in a rubberized coating. This rod is allowed to swivel and pivot at its connecting point with the release’s wrist strap.

The trigger/head mechanism featured on the Stinger is of a dual-caliper design, meaning that each jaw of the release opens independently from one another when actuated.

An integrated return spring returns the Stinger’s jaws to the closed position when no pressure is being applied to its trigger.

I have owned a T.R.U. Ball Stinger release for approximately 15-years. In years since I have used this release exclusively for both hunting and target shooting.

The following are my first-hand observations, regarding the T.R.U. Ball Stinger.

I have always been, and continue to be, extremely pleased with the level of comfort provided by the use of my Stinger release.

The wrist strap featured on this release is somewhat padded in design and carries a wide enough profile to prevent indenting into an archer’s wrist, even during prolonged practice sessions.

The Stinger also remains quite snug on the wrist and does not require constant readjustment, as is the case with many releases on today’s market.

Simply velcro the strap around your wrist, tighten the exterior Velcro strap in place, and you are ready to shoot.

One is also spared from the hassle of fighting with a buckle-style clasp, as is found on most modern release aids of this type.

I am also extremely fond of the Stinger’s trigger positioning. This release features a half-moon shaped trigger, which is simple to depress, even when wearing thick winter gloves.

I have found this to be of enormous value when bowhunting in the late winter cold. The trigger is also orientated at a 90-degree angle to the mechanism’s body, rather than canted at an angle.

This seems to allow for a steadier trigger pull than would otherwise be possible.

The action of the trigger itself is quite smooth. Surprisingly, even today, after over a decade’s worth of use, the Stinger’s trigger action is as seamless as it was on day one.

I have never experienced any binding or hesitation within the period of time that I have owned my Stinger release.

Many release aids are known to cause a certain level of wear to a bow’s string or d-loop. In severe cases, this wear can even necessitate the replacement of these components. 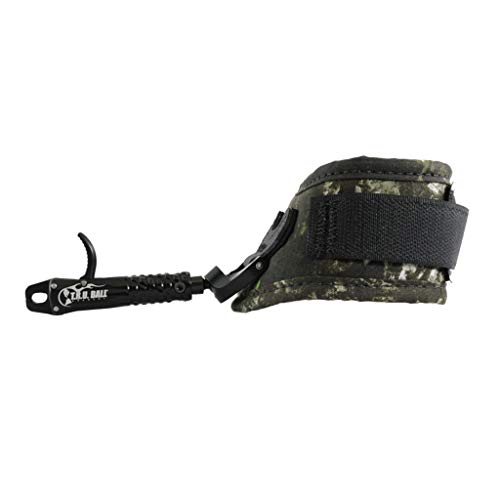 However, I have never experienced issues of this nature when using the T.R.U. Ball Stinger. Throughout the years, I have owned a handful of bows, all featuring strings and d-loops of various compositions.

None of which have been negatively impacted by the Stinger’s use.

These observations can be largely explained by the Stinger’s use of a dual-jaw design. Since each jaw of the stinger’s release mechanism opens independently, little additional torque is placed upon a bow’s string or d-loop.

The Stinger’s jaws do not roll off of the string, as is typical of a hook-style release.

Overall, the Stinger’s design seems rather well thought out. One of my favorite Stinger design features is that which pertains to T.R.U. Ball’s use of a solid stanchion between the unit’s wrist strap and trigger mechanism.

This solid rod eliminates the use of traditional corded or strapped securement, thereby eliminating slack from one end of the release aid to the next.

This has proven useful, as the trigger mechanism can be quickly and effortlessly flipped into position prior to a shot.

This prevents an archer from being forced to fumble with a cumbersome strap of any type, which can cost valuable seconds when preparing for a shot at game. 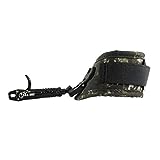 I literally can not say enough regarding the Stinger’s durability. Over a decade and a half of use, I have not experienced any mechanical issues with my Stinger release. For all intents and purposes, the Stinger is as reliable as the day is long.

I have simply been unable to wear this release out, even after years of bowhunting in various weather conditions, and taking an untold number of shots.

The Stinger has remained a constant in my bowhunting arsenal, even when other pieces of gear have come and gone.

I highly recommend the T.R.U. Ball Stinger to any archer who is looking for a quality release aid, that will stand the test of time.

After 15-years of use, I have found little if any issue with the Stinger, as a whole. Even more impressive, is the fact that the Stinger can be purchased for a reasonably subdued retail price.

The purchase of a T.R.U. Ball Stinger should be seen as an investment toward an archer’s future, and the continued growth that they will experience along the way.

No matter your archery-related endeavor of choice, the T.R.U. Ball Stinger should be at the very top of one’s “must-have” list of essential gear

Hi, I'm Darren, and I've been bow hunting for over thirty years. I'm the senior- editor for this site, and I contribute to it regularly.