Few categories of hunting-related gear have received as much attention in recent years like that which pertains to trail cameras. It seems as if nearly every hunter has at least one trail camera at the ready in the current era. This, of course, is for a good reason, as trail camera surveillance serves as one of the most potent scouting strategies at a hunter’s disposal.

I, myself, purchased a number of Spypoint Link-Micro cellular trail cameras approximately a year ago. I used these cameras throughout the 2020-2021 deer season and continue to operate each today.

This has provided me with a first-hand perspective, from which to review these highly popular, yet economically priced cell cams.

Most recently, cellular trail cameras have taken the industry by storm. Cameras of this style send captured images directly to a hunter’s smartphone, thereby providing feedback in real-time.

Many hunters find cameras of this nature to be ideal when implemented in a low-impact hunting strategy.

However, numerous manufacturers have now begun offering economically priced cellular trail cameras that are largely affordable on any budget.

The Spypoint Link-Micro is host to several noteworthy features, which make it quite the value, especially considering the camera’s minimalistic price point. 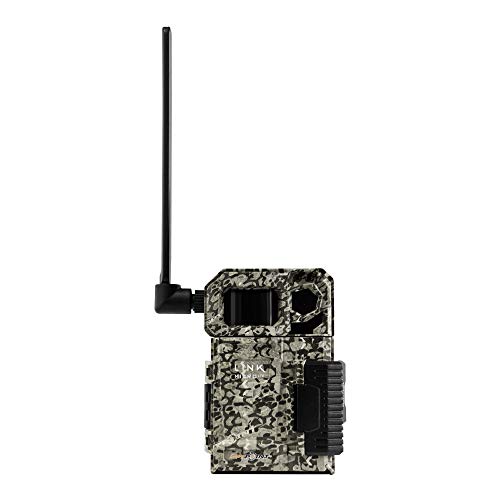 This camera offers consumers an effective flash/trigger range of 80-feet and showcases a relatively quick trigger speed of 0.5 seconds.

The Link-Micro is also capable of capturing photos with sufficient clarity, as it showcases a resolution of 10 megapixels. This camera also offers a multi-photo mode, where up to two images can be captured per trigger cycle. Additionally, each photo taken is stamped with information regarding date, time, moon phase, and temperature.

Although images are transmitted via LTE cellular signal, you can store photos via a micro-SD card. The Link-Micro accepts SD cards up to 32 GB in capacity, providing significant storage capacity.

Power is provided to the Link-Micro by using 8-AA batteries, though the camera is also compatible with 12V auxiliary battery packs.

The Link-Micro transmits photos to a hunter’s mobile device, through the use of a proprietary Spypoint app. This app categorizes photos for each camera in use, while also allowing users to change functional settings on-the-fly.

I currently own a total of five Spypoint Link-Micro cell cams, most of which have now been in use for the better part of a year. I was initially drawn to the Link-Micro due to its relatively affordable price point.

The following are my first-hand observations, regarding the Spypoint Link-Micro.

I must honestly say that the initial setup of the Link-Micro was far simpler than I had anticipated.

Downloading the Spypoint app was no more tedious or time-consuming than downloading any other mobile app.

Connecting the Link-Micro to Spypoint’s app is also relatively easy to do, with the entire process taking only minutes to complete.

Each Link-Micro camera comes with a unit identification number, which is entered into a prompt within the Spypoint app. Once this number has been entered and the app has recognized the camera in question, placement can commence.

General camera settings can be changed with the unit in hand or through the use of an app-based menu. These settings determine the “time-out” period between photos, as well as the number of photos taken during each trigger cycle.

Users can also dictate the frequency of photo transmission. I am quite fond of this feature, as it allows me to obtain the most recent information regarding deer movement while also being mindful of battery longevity. As transmission frequency increases, battery life decreases at a proportional rate.

At times, photos viewed through the Spypoint app can leave a little to be desired, in terms of clarity. However, photos can be viewed in higher resolution when pulled directly from the unit’s SD card.

Alternatively, HD images can be accessed through the app itself, with the purchase of an upgraded data plan.

While images viewed through the Spypoint app can be somewhat grainy at times, they are still clear enough to identify a certain amount of fine detail.

In fact, individual bucks can be easily identified, with no issue whatsoever.

In comparison, nighttime photos tend to be less clear than those taken during daylight hours, though this is to be expected.

Nighttime images taken at distances in excess of 40-feet tend to be more difficult to discern. However, this is an issue that is hardly limited to this camera in particular.

Overall, I am very pleased with the reliability of the Spypoint Link-Micro. Each of the five cameras that I currently own, has functioned flawlessly, up to 95-percent of the time that they have been in use. 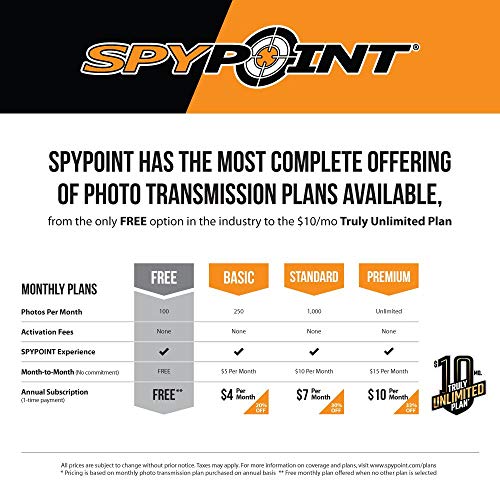 I have, on occasion, experienced minor connectivity issues. However, the vast majority of these issues have been caused by nothing more than an antenna that has been knocked downward by raccoons, or other wildlife.

In virtually every case, simply realigning this antenna has restored full connectivity.

On a single occasion, data transmission has been interrupted, due to the need for a firmware update. However, Spypoint provides these updates, free of charge.

Installation of this firmware can be easily completed by downloading the new file onto a micro-SD card, which can then be placed into the camera’s card slot. Updates of this nature take little more than one minute from start to finish.

As most are well aware, those using a cellular trail camera must purchase a data plan, to have photos transmitted to their mobile devices.

In many cases, these plans are accompanied by sizable fees, which can prove quite prohibitive with time. Luckily, Spypoint offers some of the most economically priced of all data plans.

Spypoint LTE data plans range from $5-$15 per month, or $4-$10 when purchased with an annual subscription. 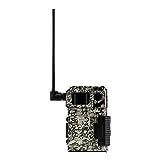 A free data plan is also offered, which allows for the transmission of up to 100 photos per month.

While this is a relatively limited number of photos, one could theoretically use this plan during the off-season, in order to keep tabs on their local deer herd, without incurring any additional fees

I must say that I have been quite pleased with each of the five Spypoint Link-Micro trail cameras that I have purchased.

While there are certainly higher resolution cell cams available, the Link-Micro seems to offer an ideal balance of reliability and value. I also feel these cameras to be more than adequate for use in almost any scouting regimen.

Simply put, the Spypoint Link-Micro is an ideal choice for any hunter that is looking to monitor their hunting spots around the clock, while operating on a working man’s budget. That´s why this trail camera is on our bowhunters wishlist.

In fact, I already plan to purchase several more of these cameras over the next few months, as I feel them to be a worthy investment on almost every front.