The Best Arrow Rests for Hunting in 2023

Today’s arrow rest market can be easily divided into two subcategories, which include fixed rests and those of a drop away design. Each of these two types of rests carries its own distinct merit and can be used to a high degree of accuracy in almost any case.

However, much began to change with the popularization of newer, drop-away style arrow rests in the early 2000s.

Of these rests, few have received as much fanfare as those marketed under the Trophy Ridge Sync namesake. The Trophy Ridge Sync has since gained a reputation as being the benchmark in affordable drop-away technology and has been used by a countless number of archers over the past several years.

I, myself, use a Trophy Ridge Sync arrow rest and have for quite a while. The following is a first-hand account of my experiences during this period of time, and what any archer should know when considering a purchase of this nature themselves.

At a Glance: The Top Arrow Rests For Bow Hunting

So lets get started!

The Trophy Ridge Sync is a cable-driven drop away arrow rest, which is designed to also provide full arrow containment when placed in the “cocked” position. The Sync features an integrated containment finger directly above the forks of the unit’s drop-away mechanism. This containment finger prevents an archer’s arrow from falling off of its rest when the bow is held in a non-vertical position.

Once an arrow is nocked, an archer cocks the rest’s drop-away mechanism into place, by way of a tab on the unit’s thumbwheel.

As an archer’s bowstring is released, the Sync’s cable drive disengages the unit’s cocking mechanism, letting the attached arrow fork drop away instantaneously. This ensures that an arrow’s fletchings never come into contact with the rest itself.

The Trophy Ridge Sync is constructed of CNC aluminum, steel, and hardened plastic components, all of which are quality tested to provide the utmost reliability. In a bid to reduce noise, the unit’s arrow fork is covered in a piece of laser-cut felt.

I must say that the potential speed and accuracy-related benefits of drop-away arrow rest usage directly influenced my decision to purchase the Trophy Ridge Sync. Prior to this purchase, I had used a full containment rest for a period of 6-7 years, before ultimately experimenting with several drop-away alternatives.

The Trophy Ridge Sync comes in both right and left-handed models, each of which features easy-to-use windage and elevation adjustments. This allows an archer to fine-tune the Sync’s performance for unparalleled accuracy.

My first experience with the Trophy Ridge Sync Came roughly three years ago when outfitting my newly purchased Hoyt Defiant with a host of accessories.

I had decided that a drop-away rest would be a nice fit for this bow, as I was hoping to achieve the highest level of accuracy possible.

I had used drop-away rests in the past, with much luck. However, I was intrigued by the Trophy Ridge Sync’s stellar build quality, and more than pleased to see that this unit was offered at a relatively reasonable price point.

After installing the Sync on my bow, I was ready to hit the range. When doing so, I found this rest to be quite functional, as it operated quite flawlessly.

Using the Sync was as simple as nocking an arrow, before clicking it into the semi-cocked position with my thumb. Doing so proved to be of no issue, and the Sync anchored smoothly into the fully-cocked position upon coming to full draw.

I was also pleased to find that the Sync’s actuation led to no additional noise upon releasing my shot. This was a point that I found substantial favor in, as a noisy bow stands a chance of spooking game upon its release.

In a hunting scenario, the Sync proves quite efficient. I can nock an arrow, before locking the release’s cocking mechanism in place, thereby having everything ready, in the event that a shot was to present itself.

The Sync’s containment finger also ensures that my arrow will not fall from its perch, even if jostled about.

Today, nearly three years after purchasing the Trophy Ridge Sync, I am just as impressed as I was on day one. This rest functions in the most trouble-free fashion, at a price point that is affordable on any budget.

I feel that the Sync would make a worthwhile addition to the bow of any archer who is looking to enhance their accuracy, by eliminating fletching to rest friction.

I do, however, advise leaving matters of installation to a trained bow technician, as the Sync’s drive cable must be expertly timed to provide the highest possible level of shootability. A failure to properly set this timing can lead to poor fletching/vane clearance, thereby negatively impacting the accuracy of a bow. 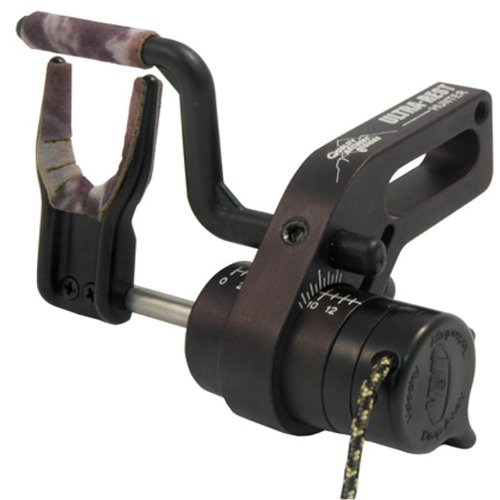 The Quality Archery Designs Ultra Rest Hunter Arrow Rests is a drop away version that’s only suitable for right-handed hunters. The arrow rest fits onto the compound bow whenever it’s needed, so it doesn’t always need to be attached.

The curved, padded rest is overshadowed by the capture bar that runs across the top of it to protect arrows from moving outside of the catchment area. A patterned timing cord is also attached which is adjustable using the cable clamp. The design of the product makes firing off shorter arrows no longer an issue.

The felt around the mount is laser cut for smooth draws with the arrow gliding more easily. The thumbwheel allows for arrow loading without difficulty in a single motion. The parts are made from Delrin, CNC aluminum, and stainless steel. In our opinion this is the best arrow rest. 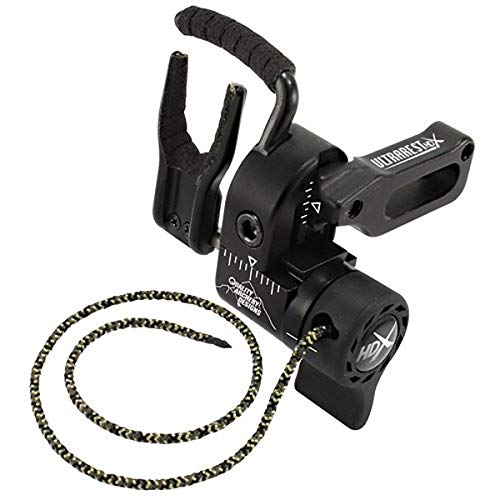 The Quality Archery Products HDX Arrow Rest is available in either a right-handed or left-handed version. There is also a color choice between black and Realtree AP camo to blend into the forest better.

The product is designed using stainless steel as its main material for robust durability over time. As the best model in the Quality Archery range, there are improvements over their HD model.

Vibrations are mitigated using their anti-vibration features. Peak vibrations are reduced significantly with the molded rubber use helping in this regard.

The block design approach is ideal for easy mounting on the compound bow. The timing cord provided is variable in length and adjustable.

A full draw mark indicates where the launcher should be when in this position ready to release an arrow on target. 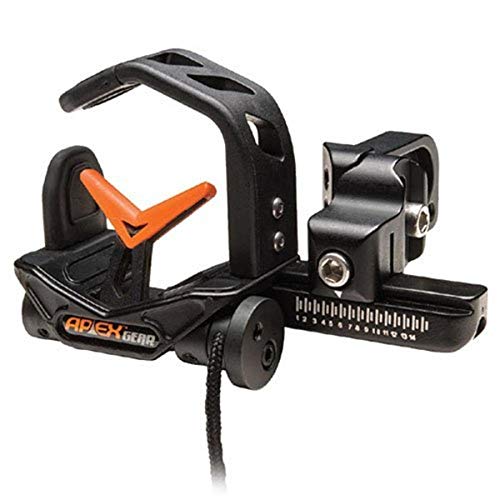 The Truglo Downdraft Drop Away Rest RT Xtra is a robust-looking model made for improved performance. The bushings are fully sealed to promote downward motion when an arrow is launched.

The dampeners are made from rubber to reduce the sound when an arrow is loaded into the bow. The product is easy to attach to the buss cable and no bow press is needed

Installation can be performed without difficulty at home or on the hunt.

When firing an arrow, there is reverberation or bounce in response. The drop motion ensures the fletch feathers at the back of the arrow won’t catch on the arrow rest impeding its flight.

The arrow rest can hold the arrow in position near the nocking point to improve accuracy for beginner archers. The green camo is particularly good here and blends well into the background. 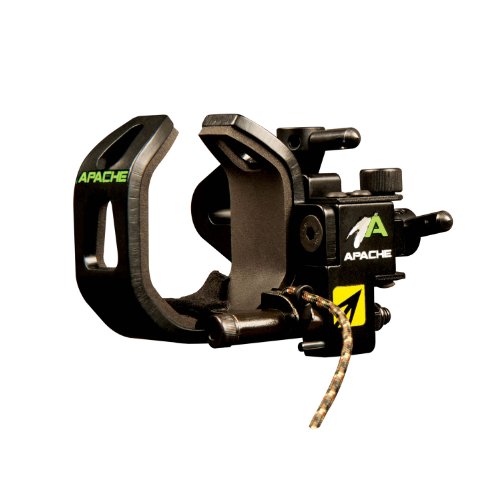 The New Archery Micro Apache Arrow Rest is an angular model that lacks the finesse of other rests.

It is a black version that is only interrupted by the gray interior of the rest and occasional branding here and there. This is a right-handed only model.

Installation and subsequent tuning is simple to achieve and doesn’t need separate tools to complete it. A laser has etched markings to guide the tuning process so you’re not working in the dark.

The construction is metal with a dampening felt added internally to reducing vibrations and sound when loading an arrow or having it rest in place.

The attached string will guide the path of the arrow and rises up when the arrow passes through the rest on its way to the target. 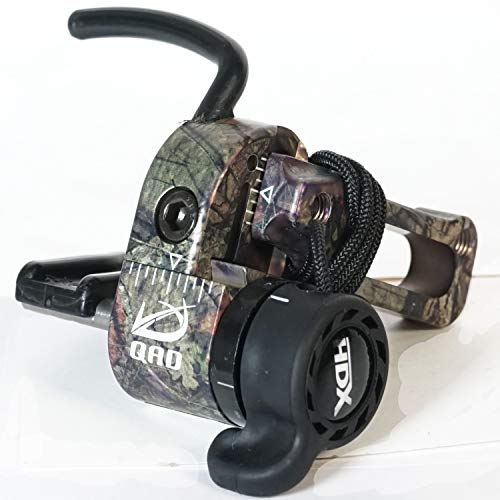 The Quality Archery Designs Ultra-Rest HDX is a top-of-the-line arrow rest designed with a Mossy Oak camo to fit into brown, wooded areas nicely. This right-handed model is made from a mix of stainless steel, Delrin, and CNC-cut aluminum.

The arrow is completely contained inside the arrow rest which is lined with laser-cut felt to dampen any sound from the arrow being loaded in or during the initial flight.

A capture bar covers the top of the arrow rest, is slightly curved, and padded too. The mechanism falls away upon arrow release to avoid the Fletch feathers touching the sides which could affect the flight path.

The HDX model is the best in its class from Quality Archery. Improved harmonic dampening technology is deployed to prevent sound emanations from alerting the prey as the arrow is let loose.

An injection-molded thumbwheel is also included to reduce vibrations further. The patented technology allows the arrow rest to fall away silently only once the arrow is fired and not before.

The Value Of Drop-Away Technology

The true value of a drop-away arrow rest, such as the Trophy Ridge Sync, lies in its name, as well as its mechanics. Standard full containment rests subdue an arrow until the time of its release by “clinching” it in place.

Many rests of this type use brush-like fibers to facilitate this action. An arrow’s shaft, as well as its vanes in most cases, must pass through these fibers upon release.

This period of contact between an arrow and a standard containment style rest, though momentary, has the potential to impact arrow flight and overall accuracy to a certain degree.

Some also feel that this added resistance has negative effects on arrow speed. Though such effects are generally quite minor, the possibility of such interference certainly exists.

In the case of a drop-away style rest, this interference is substantially minimized. Such rests can be timed in two different manners, by chord, or by limb.

In the case of the Trophy Ridge Sync, the latter is true. When an archer releases their arrow, the rest itself drops in an almost instantaneous fashion.

This “dropping” action largely eliminates the chance of fletching to rest interference, which can benefit a bow’s overall level of accuracy. Many archers also report gains of 3-5 FPS in arrow speed, when switching to a drop-away style arrow rest.

With an arrow rest, it is important to own one that uses quality materials. Aluminum that’s been CNC machine cut or stainless steel is two of the most common materials.

With padding around the arrow rest and the capture bar that sits just above it, look at felt or another material.

The felt or foam must remove the sound of even a good arrow sliding along the padded surface and not affect the trajectory of the arrow once it’s released.

An arrow rest that is easy to fit either on the hunt or before setting off, is a good feature to have too.