Many bowhunters will talk about archery sights or even shooting form when asked about the accuracy of their archery gear. Many hunters don’t realize how crucial an arrow rest can be to accuracy. Bowhunting equipment, including arrow rests, has evolved dramatically in the past decade.

Especially for beginners, it is clear that selecting an arrow rest can be a difficult task as we learn about how arrows fly and the situations under which we regularly use our bows.

Why Do You Need an Arrow Rest?

The purpose of an arrow rest is to stabilize the arrow until it is released from the string. For your arrows to fly straight, the fletching or feathers must clear your bow’s riser to prevent the arrow from wobbling or twisting. An arrow rest solves this problem. The rest serves as a platform from which your arrow launches. 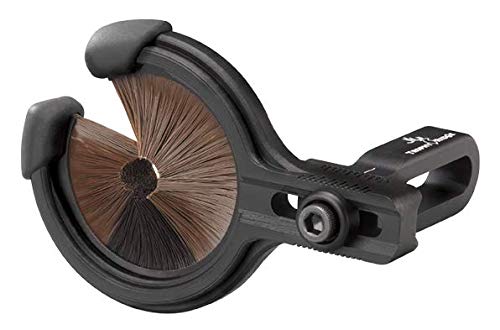 My preference is a shot through rest, particularly the Whisker Biscuit style. The rest includes a disk with stiff bristles and a hole in the center that fits the shaft of your arrow. As the bristles have been enhanced to suit the needs of archers better, many of the early problems with biscuit-style arrow rest ripping fletching from arrows are gone.

As the arrow is released from the bowstring, these rests remain in contact with the arrow, providing maximum stability before the arrow flies freely. Some believe that because it touches the arrow until the last moment, poor shooting form will be magnified further on the target downrange. The argument makes sense to me, even though I haven’t found that the case.

There is a loss of about 2 feet per second (FPS) of arrow speed with this type of rest. However, if you need to shoot from a treestand, it’s easy to adjust, it keeps your arrow securely, and it’s quiet to shoot from it. This arrow rest is trendy because there isn’t much going wrong.

Also, I would not be too much worried about losing some speed. I am not a huge arrow speed fanatic, and I find that it isn’t noticeable in the woods if you shoot 295 or 300 fps… 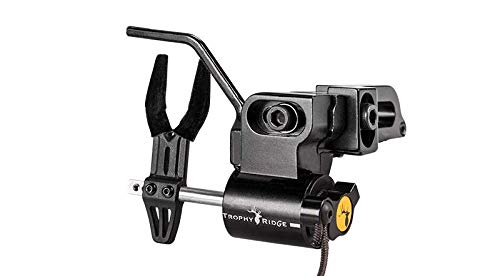 As the name suggests, the drop-away arrow rests drop before the fletching on your arrow passes by, which means that the fletching is never in contact with the arrow rest. A small cord pulls the rest into position as you draw your bow. It takes some practice for new archers to keep the arrow on the rest as they draw.

This arrow rest has the advantage of having no contact with your arrow fletching. However, you have to adjust it to drop at just the right moment. For a beginner, it can be challenging. By having so little contact with the arrow, this arrow rest will also allow you to achieve the maximum arrow speed (FPS).

Talking about speed. Keep in mind that the maximum speeds advertised by bow manufacturers are measured under controlled conditions in a test facility. Arrow speeds in the real world can be way slower than advertised.

A typical arrow rest will have either a flipper or two-prong design, with your arrow will be resting on a small, usually spring-loaded arm made from metal or wire covered with a plastic material to muffle noise. Today, many bows that shoot faster struggle with arrow rests that contact arrows at some point.

Although they are very forgiving of poor shooting form and are generally easy to tune, they can’t keep up with today’s technology. Shoot through and drop-away arrow rests can significantly improve arrow flight and accuracy.

Arrow rests are an essential part of archery equipment. There are three basic types of arrow rests: shoot-through, drop-away, and standard arrow rests. The Whisker Biscuit style rest is a shot-through arrow rest that remains in contact with the arrow until it is released from the bowstring. It has the advantage of being easy to adjust, keeping the arrow securely, and being quiet to shoot from.

The drop-away arrow rest falls away before the fletching on your arrow passes by, which means that there is no contact with your arrow fletching. Although it is challenging for a beginner to keep the arrow on the rest as they draw, by having so little contact with the arrow.

Hi, I'm Darren, and I've been bow hunting for over thirty years. I'm the senior- editor for this site, and I contribute to it regularly.